‘Privet’ from Sochi, Russia. It has taken be much longer than I would have liked to post my first update from the Olympics, things have been busy and exciting over here.

The first few days have already been an amazing experience. Walking into opening ceremonies was a dream come true and the culmination of a lifetime of hard work. It is definitely something I will never forget.  Days 1 and 2 saw the US win two Gold medals in snowboarding Slopestyle, making its Olympic debut.  Sage Kotsenberg won the first Gold medal of the Games by putting down a trick in his first run that he had never landed before with style that many in the industry say is disappearing in favor of double and triple corks that are more like figure skating than snowboarding. The Queen of Slope, Jamie Anderson, overcame immense pressure by landing her last run to stand atop the podium on the grandest scale. Anything else would have been an upset. 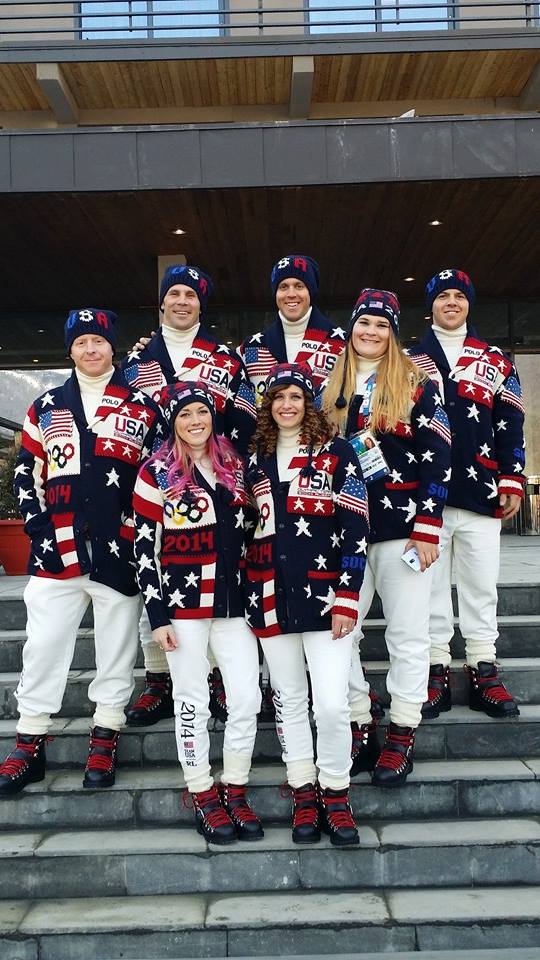 The Offical US Olympic SBX Team

It was incredible to watch Julia Mancuso add to her already impressive collection of Olympic medals in Alpine skiing with a bronze in the Super Combined. In women’s moguls, Hannah Kearny also added a bronze to her resume, which includes a Gold from 2010.

Day 4 was a tough one for the ol’ US of A. First, SMS alum and XC skier Sophie Caldwell finished 6th in Sprint Finals after a fall half way through the lap. She was skiing amazingly well and despite the fall it’s the best finish ever by an American woman.  2014 marked the first time an American male failed to reach the podium in Halfpipe. They boys rode amazingly well last night despite really challenging conditions and every one of them shredded their hearts out. They may have walked away without any hardware but they are still the most talented group of riders I have ever seen and hats off to them for leaving it all out there.

It seems like there has been a ton of negative media swirling around on the internet and I would like to clarify that things in Sochi have been absolutely amazing so far.  I have felt incredibly safe, with some 40,000 security and military personnel who have made their presence known but never been obtrusive. It is true that there is still a lot of construction going on, but every one of the venues has been a sight to behold and the athlete villages are nothing short of incredible.

The video above is a short insight into what some of my first few days have been like. Check it out and let me know what you are interested in hearing about from my day-to-day life as an Olympian.