I was 8 years old when I entered my first snowboard competition, the Vew-Do Jib Fest at Bromley Mountain. I don’t remember why I wanted to do it; maybe because I needed an excuse to ride the park that would have otherwise been closed or because it just looked fun, but 20 years later I’m still at it. I have no idea how many snowboard events I’ve participated in, well over 100, but last year I took the proverbial yardstick to dirt for the first time and entered the ever-popular Enduro mountain bike world.

There is something refreshing about being a total rookie again. I had no idea what I was getting into or how I would stack up and I’d be lying if I said I didn’t care how I finished but I was mainly in it for the good times. And I loved it. You couldn’t find a more fun form of cross training. 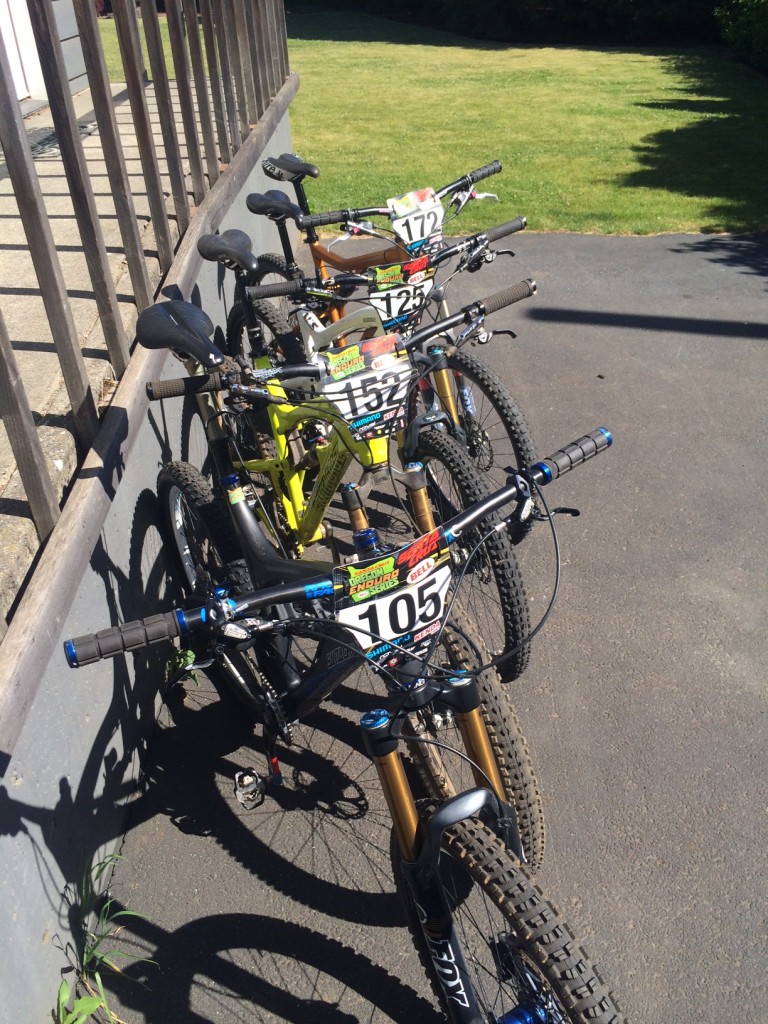 My coach Peter, an equally big bike nerd and green enduro racer, saw the value and invited the entire US Boardercross team to head to his home town of Hood River a week ahead of our on snow training camp at Mt Hood to race the first stop in the Oregon Enduro Series. You’d be hard pressed to find another group of people as competitive as my teammates – we could turn grocery shopping into a contest; but in something so new and out of our comfort zone we were all just trying make it out of the weekend reasonably unscathed.

With our coach/local trail guide in Europe for meetings we set out with a less than stellar map and tried to scout a few of the stages we’d be racing.  5 hours, 22 miles, and countless turnarounds later we made it back to the house with 3 of the 8 stages ridden and not the slightest clue where the others were. It wasn’t the start I had been looking forward to but it was good to get the inevitable speed bumps out of the way early on. After lots of map reading and texts from my Barcelona boardroom trapped coach Peter, we started to get the lay of the land and checked out a few new stages everyday. The trails in Post Canyon where the race would be held are some of my favorite that I have ever ridden. Lack of rain made the typically tacky PNW dirt dry, dusty, and lacking the grip we had been accustomed too. When Friday rolled around we more than happy to take a much needed rest day for our tried legs and sore sitbones.

We awoke Saturday morning to something we were used to on race day – hurry up and wait. With the fastest categories heading up first, our expert (cat2) and sport (cat 3) divisions weren’t set to start until well after noon. Race day anxiousness caused me to get on the shuttle a bit early and I found myself at the start over an hour a head of my scheduled start time. Fortunately the Oregon Enduro Series crew had things pretty dialed and there were no delays; the race was almost exactly on time.

Stage 1 would be the longest and most demanding with a punchy climb smack in the middle that was so steep that it forced more than a few, myself included, to run up.  Murphy’s Law laughed in my face by dropping my chain for the first time ever and it cost me more than a few seconds.  Stage 2 was the steepest and most technical, featuring a tough but fun rock garden that everyone on the team managed to navigate rubber side down.  Stage 3 was a trail that isn’t frequented by as many bikes as it is moto’s; it was fast and particularly loose. It was probably the first time in my life I’ve ever been glad to see ruts, which helped me keep it pointed in the right direction. I felt like I was making some improvements and my stage finishes were getting better with each one.   After 800 feet of vertical gain and the only tough transfer, stage 4 waited with the most modified terrain of the race. The upper half wound down a trail named Bad Motor Scooter that is filled with doubles and steep bank turns that were made unusually slippery by ball bearing-esque grains of dirt into a lower half that was less jumpy but equally as slick. When I crossed the finish line I was stoked to make it though day one without any big mistakes or crashes. I joined a handful of the competitors in my division and we made our way towards the event expo area to see how we stacked up and to wait for my teammates finish. En route I detoured to take a mellow run on stage 7 that we would be racing the next day only to clip a tree and head over the bars. I managed to find a softer patch of dirt to roll out in and walked away glad that I had finally gotten an inevitable crash out of the way when the clock wasn’t ticking.

Back at the team house that night we went over results, seeing where we stood amongst each other, trash talking as often as possible about the following day. With my chain drop and a minor low speed crash by my coach Peter, things were pretty tight, I knew my 13 second lead wasn’t much of a cushion for day 2.

The second day, riders started in reverse order, with the slowest starting first. Stage 5 was an extended version of the stage 2 rock garden from the previous day, starting higher up on an open jeep road with lots of loose melon sized rocks. Misfortune struck again as my chain popped off just as the trail dropped down into the woods and I made a mental note to get a guide on order as soon as I got home. Stage 6 wound down Anton’s Ridge which is steep and narrow before crossing a road onto smoother terrain with a short climb and some fun moto berms. I opted to take the chicken line over the only real drop of the race and finished wishing I could have let off the brakes a little more through the swooping turns.  Stage 7 was probably one of my favorites, which wound down a trail called Mitchell’s ridge. It’s fast and flowy with amazing bike park-esque berms lower down, where the local bike shop, Dirty Fingers, would later set up camp with a keg to heckle and cheer the riders. The final stage was on a trail that has been closed for years due to private property access issues so it was pretty rad to get to check it out. A big, straight G-out in the middle tested my cahones and willingness to let off the brakes – mellow 35 mph on narrow single track – and finished with a flat out sprint into the finish corral. 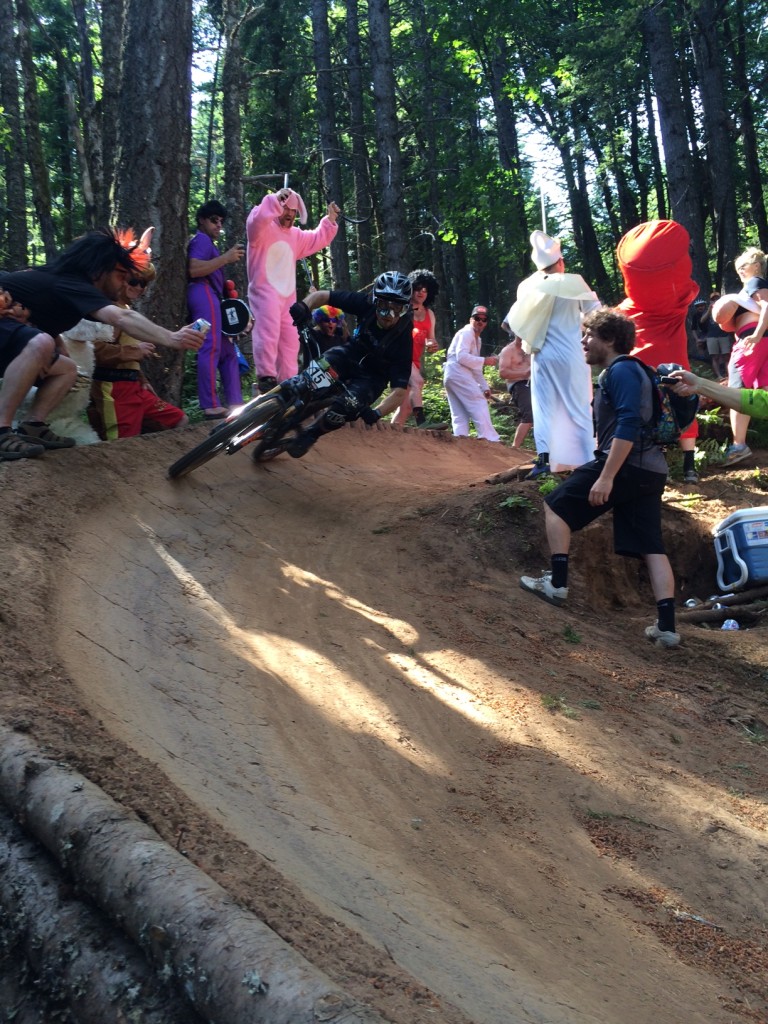 My teammates cheered, hard earned beers in hand, as I crossed the finish line. I was stoked to look over and see that we had all made it out in one piece with only a few minor scrapes and bruises. The event organizers used a timing system that showed live results for each stage as soon as you crossed the line, which my coach used to quickly and emphatically point out that he had beaten me on the last two stages. After getting some delicious free lunch and a much-deserved beer, I joined the rest of my crew to go check out the pros on the aforementioned berms and heckle with the locals. It was rad to see how fast those guys could go through those sections and wondered if people get the same impression when they watch us race boardercross or if it was just the athlete in me looking on enviously.

When the last pro had crossed the line, we waited around for final results and grabbed tickets for the raffle that included, unbeknownst to us, any brand new Santa Cruz Bicycles of your choosing. After almost an hour of giving out T-shirts, Garmin’s, single break rotors (??), and water bottles, almost all of us had won something that wasn’t the bike we hoped for. By some miracle, the number they drew belonged to my coach Jeff, a guy who loves to ride and recently had his first child and is in no place to upgrade his older bike – it couldn’t have gone to a more deserving person.

Hurry up and wait

Finally, when all the numbers were crunched, my coach Peter had not only won his 40+ division, but had also nabbed me by 2 seconds after two days and 42 minutes of racing. I couldn’t have been more proud to hoist him up on my shoulders with my teammates and carry him up to the top of the blocks. It was a cool moment to have the roles reversed and to support someone that has given me so much over the course of my athletic career. It was a great weekend of racing and we all pedaled home stoked that we had finished an event that a week earlier had some wanting to back out. With the exception of my coach, none of our times were all that impressive, especially not for a group of professional athletes, and we couldn’t have cared less. We knew how we stacked up against each other and in the true ‘spirit of enduro’ congratulated one another as we simultaneously gave each other shit the whole ride home.

Thanks to US Snowboarding, Sports Garage Cycling, Shimano, and Stages Cycling for their support.