On Tuesday I attempted to ride my bike 237 miles in one day and I still haven’t come up with a very good reason why. I had plenty of time to think about it, 16 hours to be exact. It wasn’t a race, it wasn’t part of a tour or a group ride or fundraiser. It was just a route through the mountains of Colorado that my friend and I arbitrarily came up with.

With minimal planning and almost no training (Cam was pretty much straight off the couch) we headed North out of Buena Vista in the pre-dawn hours after what felt like a quick nap. We had no support and would have to carry everything we needed: food, water, tubes, and rain gear. We weren’t going to be exploring some far off mountain range, in fact we would be going though some pretty well to do ski towns, but there were some pretty remote stretches of road in between and needed to be prepared. 7 miles in I ran over a piece of discarded truck tire and got my first flat of the ride. After I finished replacing the tube and got the tire re-seated the valve stem broke and just like that, I was down to my last tube. I had gone through more tubes in the first 25 minutes of our ride than I have in the last two years and 3000 miles of road riding. It was apparent early on that it was going to be true epic. 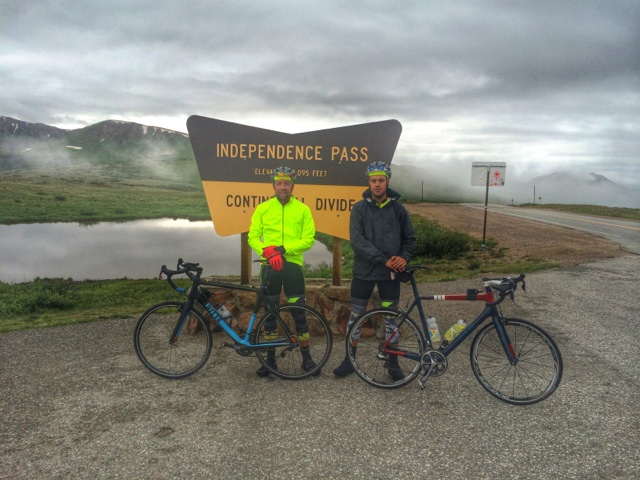 Independence Pass was our first of 4 major mountain passes and we quickly realized that the lack of oxygen was going to be one of the biggest challenges of the day. The rain that greeted us as we descended down into Aspen had held off longer than expected so we donned our gear and settled in for what looked to be a pretty wet day in the saddle. 7 hours and 90 miles in we pulled over in Carbondale to refuel before the longest and most difficult leg of our planned route. Cliff bars and Gu-packets were never going to cut it for an outing like this and we wanted some real sustenance. After we powered down full sized meatball subs we stopped in a used sporting goods shop to try and find a tube and some extra layers; even in July the mountain summits were colder than expected and we were now soaking wet. As much as I try not to be, I am a bit of a bike snob. I was riding a bike that is worth more than twice what my car is and wearing a kit that isn’t available to the public yet – taste I had acquired after working along side Cam for the past 3 summers. I never thought I would see the day when he would be so stoked to pull on a pair of used motorcycle rain pants, but we were willing to do whatever it took to stay warm and finish the ride.

We weren’t about to let the rain dampen our spirits

The rain let off a bit as we rode south into the small town of Redstone and the mountains poked out from behind the low laying clouds. At this point we were around 115 miles in, just about half way, and our bodies were reminding us how hard this was actually going to be. I’ve lived in Colorado for almost 10 years now, Cam 3 times that, and we were both still easily amazed by the beauty of this incredible state. There were certainly easier routes we could have chosen, but we were reminded of why we had picked the hard way, there is something almost inexplicable about being out in these remote sections of nature with nothing more than a bike and your own two legs to get you there. That John Denver is most definitely not full of shit.

McClure Pass was relatively short but the 9% gradient certainly felt like being kicked while you were already down. We tried to coast and enjoy the next 16 miles of downhill knowing that Kebbler Pass leading into Crested Butte would be one of toughest sections of the entire route. Cam and I had split up near the start of the climb when he pulled over to shed layers and I had wanted to just keep moving, agreeing we would regroup in Crested Butte if we didn’t pass each other sooner. The views were absolutely amazing, with one of the largest Aspen tree groves in the world spreading out as far as I could see, and I tried to enjoy the solace of the Gunnison National Forest. It wasn’t the highest or the steepest, but Kebbler felt like it just kept going up and up. To make it even tougher, almost the entire 30 miles from its base to Main Street in C.B. were dirt. The rain that had soaked us earlier made the usually well-maintained road just muddy enough to cake my bike with what felt like a few extra pounds of grime. Just past half way up the pass and around 150 miles into the ride I ran out of water. When the mountain kicked up yet again, my tired legs could barely turn the pedals over, I found myself walking my bike; I didn’t want to sit down and take a break for fear that I wouldn’t have the will power to keep going. Looking back, this was definitely tbat moment; I was having internal dialogue telling myself I just had to get to CB to refuel and then it was the home stretch. 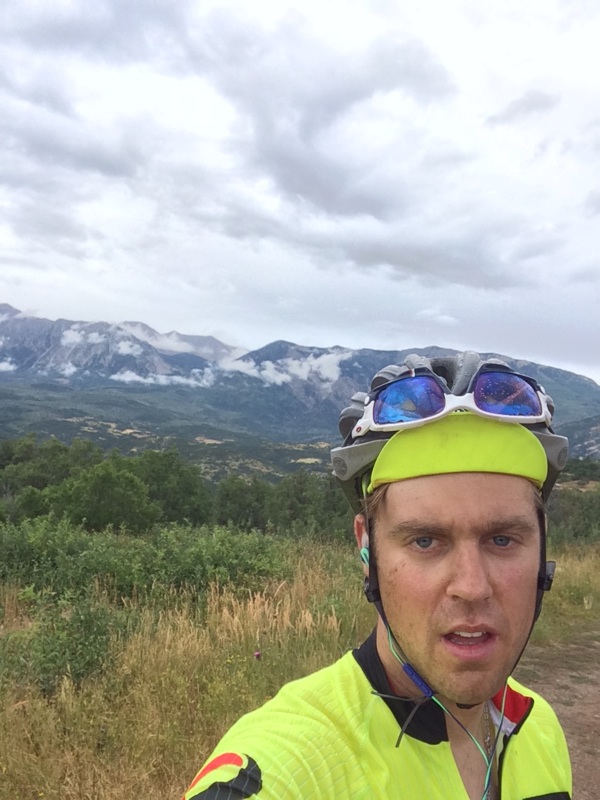 The view was amazing. My energy levels were not.

When I rolled into town I headed straight for a shop to wash off my rig and get some extra tubes for the final 70 miles. At the suggestion of one of the guys at the bike shop, I headed down the street to get a burrito. Just as I was sitting down with my much needed fuel, Cam rolled into town. We traded stories about the previous 3 hours over Mexican Coke’s that tasted like they had been crafted by the hand of God and tried to work up the courage to get back on our bikes. Finally, we walked outside to remount and ride into the evening. Looking South we saw ominously dark clouds and could hear the distant sound of thunder. We agreed that our safety was more important than finishing, Cottonwood Pass had 4 miles of road above tree line and the risk far outweighed the reward.

I took a shot in the dark and called a friend I knew used to live in town that I hadn’t seen or spoken with in several years, and by some miracle she not only answered but insisted that we come over to shower and spend the night. In hindsight, she really saved our asses. The storm that rolled through brought heavy rain, lightning and thunder that would have had us bivied under a tree out in the wilderness. We were able to shower, wash our disgustingly dirty kits, and borrow clothes to sleep in. It’s in moments like these that I am reminded of how important friendships are and I hope that down the road, I can do the same for one of mine in need.

Refueling – Hardman of the Peloton Style

As we got back on our bikes the following morning, we gained a massive amount of new found respect for the riders that make up the majority of the peloton at events like the Tour de France. They may not have leg hair, body fat or sweet tan lines but the amount of pain those guys endure on a regular basis makes them true hardmen. Rolling past Taylor reservoir we looked off into the distance and could see our final and major hurdle: Cottonwood Pass. 14 more miles of dirt up to 12,126 feet, then it was down hill all the way back to the car. My knees hurt, my legs ached and my sitsbones were rubbed raw. Even with all the suffering, I was still able to look out across the valleys and appreciate how lucky I was to be out just riding my bike.

When we finally got back into town and rolled up to the car, there was no finish line, no friends or fans to greet us, just a the 3 hour drive looming a head. And that was just fine with me. I didn’t agree to join for a bike jersey or ribbon that would tell fellow cyclists what I had done. I did it purely for the sake of trying to do something that I wasn’t sure was possible. If you don’t ever try to push past your limits, you’ll never know what you’re fully capable of. I don’t know if I will ever finish the loop, I may or I may not, but either way I’m not left with a feeling of disappointment I didn’t accomplish the goal I set out to do. I was proud that I tried. Failure is inevitable on the road of life. As any true hardman of the peloton will tell you, that’s okay as long as you keep riding. 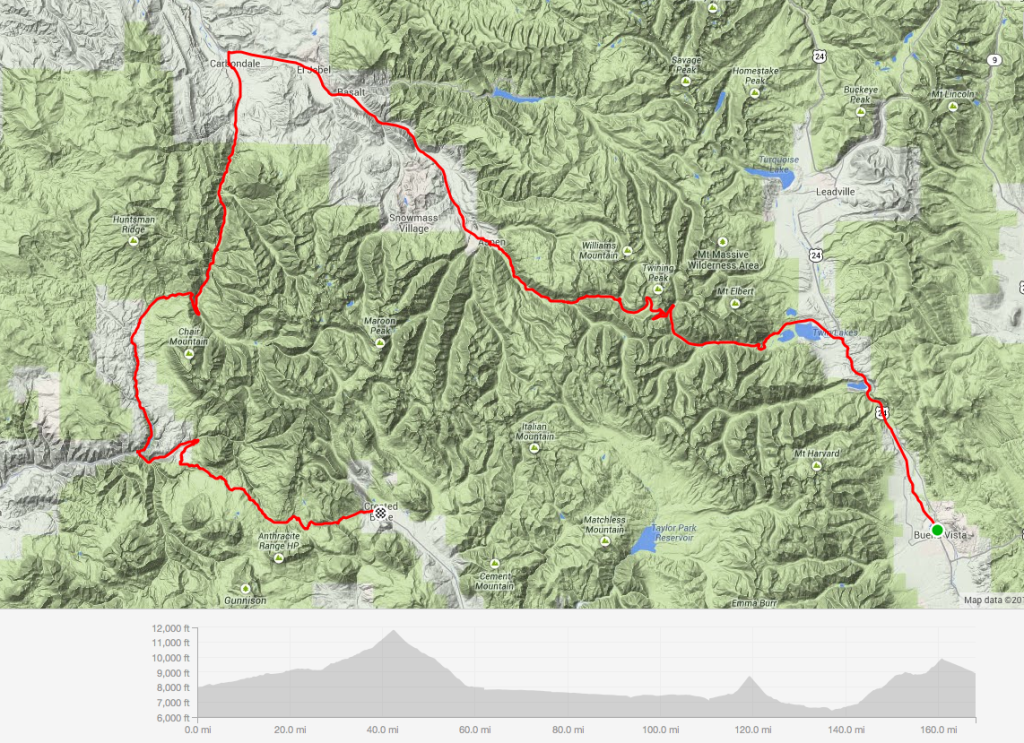 A map of our progress on day 1. Unfortunately red line didn’t connect.