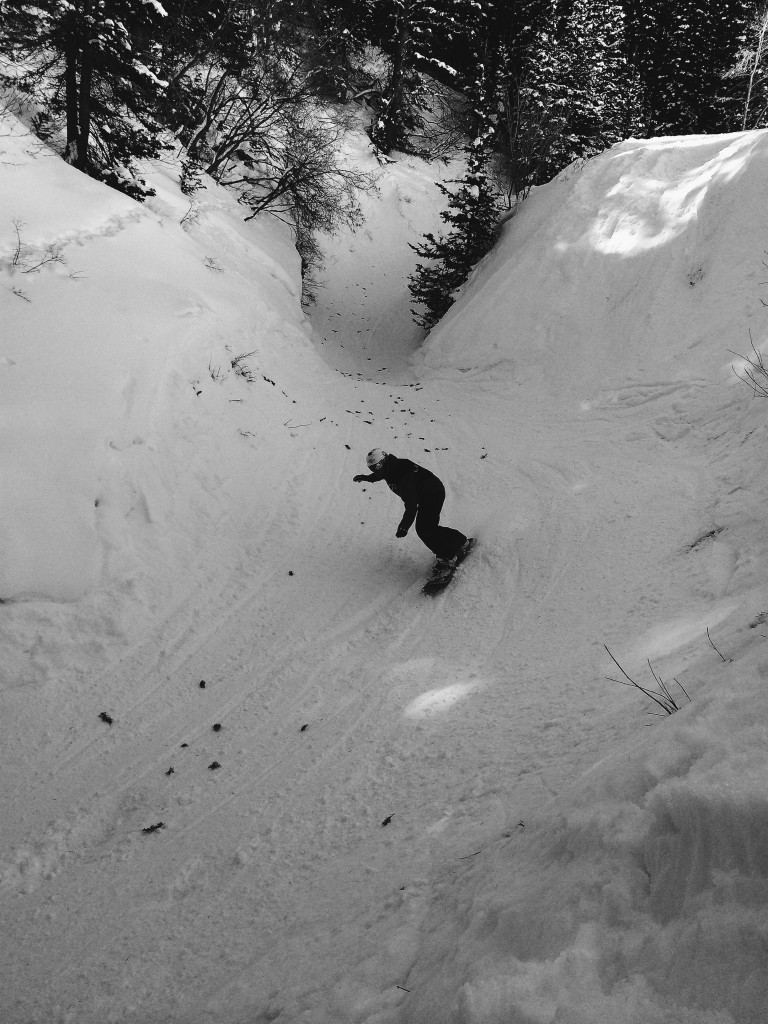 Unknown rider makes his was down the famed gulley

Almost every ski or snowboard event has its own distinct character or flavor. From snow type or pitch to elevation or builder they all leave their own unique impression on a rider. This past weekend The Canyons Resort hosted it’s annual Canis Lupus race, and it was no exception. Part banked slalom, part kamikaze downhill, the raw and natural terrain is not for the faint of heart. The event is named after the tight gulley that the race runs through, Canis Lupus, which is Latin and appropriately translates to “Gray Wolf”.

A recent storm that dropped almost 2 feet of snow was desperately needed to fill in the gulley that sees no snowmaking and has received below average snowfall so far this season. Resort staff made a wise call to close the area off three days before the event to preserve what little snow there was. Even so, ruts and whoops had already started to form before race day and they would only get deeper as 70 skiers and riders navigated the gulley.

There were 11 gates to start the affair that would help mitigate speed before opening and up going straight down the fall line. With no hand shaping, the gates were placed in an even tighter U shaped troth that after one training run had developed into flowy but somewhat dicey banks. The main gulley had naturally formed banks that were fun at a mellow cruising speed, but once you opened it up the blind corners kept you guessing about what was around every turn. After my first training run, I was just hoping to make down in one piece.

The format was two runs, the first of which would be a qualifying run to cut the field size down for a second and final go. As a first timer to the even my goal was just to make it down on my feet for the first run and see how I stacked up against the local talent that had much more experience with Canis than me. During our wait time at the top I learned I wasn’t the only one that had traveled out for the event, and it was cool to meet other riders that made the journey. I seemed the be the most nervous about hurling myself down the hill between and around trees that had never and would never see padding, adding to simple yet rough feel of the event.

Time know no judgement and the clock tells no lies

I managed to stay up right and somehow lay down the first place qualifying time, but one of the local Canyons park diggers was only a few seconds back. With snowboarders going first we got the best conditions the course would see all day. By the time finals rolled around, a few small trees and dirt patches had poked through in the initial banks, something I was totally unused to but was surprisingly impressed by. There was no attempt to cover them or patch them up, this was all about working with was Mother Nature had provided.

For finals I definitely tried to let it go in a few more places while riding the fine line between control and speed. I managed to shave off three seconds from my first run time and was stoked to make it down with out any bobbles or bails. While I definitely gave it a solid effort, I didn’t quite hang it out there far enough, Jake The Digger pinned it and got me by a few seconds. While the competitor in was a little bummed to miss the win, the normal side of my brain was relived to make it out in one piece.

The race definitely lived up to its reputation as a fun yet rugged event. With the snowboard industry making an effort to get back to its roots of simple, winter fun, there are few other events out there that better exemplify these ideals than Canis Lupus.